HISTORY OF THE CLUB

The BSC is a surf club affiliated to the French Federation of Surf lifesaving and First Aid. It was founded in 1995 in Biarritz, at the Côte des basques, in the Atlantic Pyrenees.

The physical and technical skills of the surf lifesavers of the club are quickly being noticed when selecting professionals’ lifeguards for the vigilance of the beaches of Biarritz.

In 2001, the Biarritz surf club takes its current name with the purpose of developing the Surf lifesaving sports. The surf club keep in mind the following:

In order to support the professional goals for their members that want to patrol their beaches, the Surf Club launched the first training sessions for surf rescue and first aid. First the National Safety diploma of Surf Rescue, with the requirement of First Aid training in a team.

At the same time, in a desire to train the population in first aid actions, training sessions on Prevention and Civic Rescue 1 were created for the public.
Since 2005, to increase the diffusion of first aid techniques, you can become a first aid trainer. 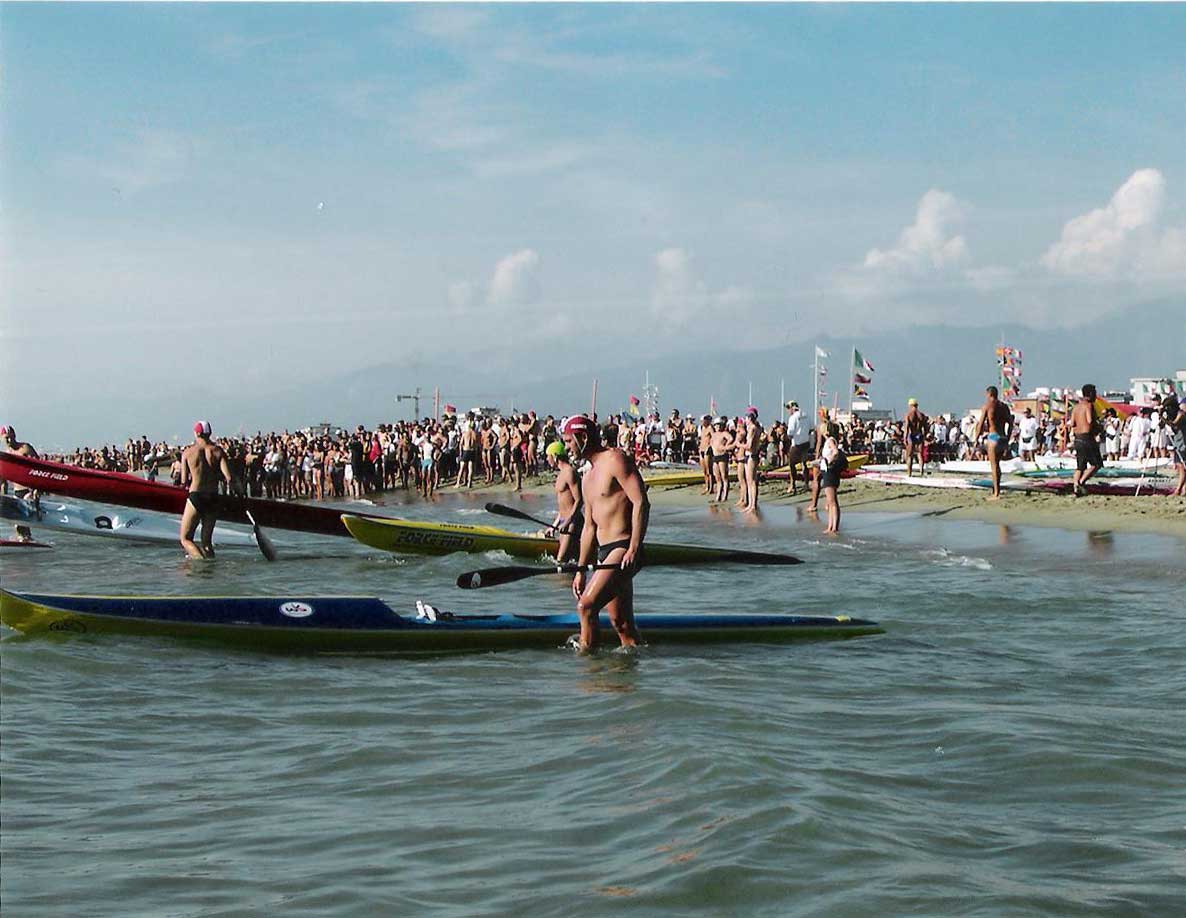 THE SPORT DEVELOPMENT
with operational rescue

Everywhere in France, lifesaving sport is gaining in scope and actively developing, through the French Federation of Rescue and First Aid. Several associations are emerging on the Aquitaine coast.

In 2004, after returning from the world championships which took place in Italy, the club acquired its first surfboat.

Since 2007, the association has taken over from fireman in providing training for lifeguards employed on the beaches of Biarritz. Here is a filmed extract of the training course.

From 2010 and the creation of the national club ranking, Biarritz Sauvetage Côtier is ranked in the Top 6, thus obtaining the status of an elite club.

Dominators in the sports world of rescue and enterprising in first aid training, the leaders of the association wanted to develop a complementary component, operational rescue. From then on, the Biarritz SC acquired its first ambulance to provide operational first aid stations at various sporting and cultural events on the Basque Coast.

In 2012, true water sports enthusiasts, the Watermans of Biarritz Sauvetage Côtier wish to develop the practice of Bodysurfing. The club then affiliated with the French Surf Federation.

In 2013, faced with demand in the territory, the association acquired a second ambulance.

The next year, during the French Championships in Hossegor, the Bask club began their coronation of French champion, which would last 4 years, until 2017.

In terms of first aid, the Biarritz Surf lifesaving became actively involved in drafting the content of the new national diploma entitled “Sauveteur Secouriste Aquatique” in the coast, and became in April 2015, the first organization in France to provide it.

For Aussies 2016, the prestigious Australian National Championships, the Biarritz surfboat crew, helmed by its president Manu IMMIG, climbed to 3rd place on the podium!

At the same time, the surf club renew its fleet of cars and provides 3 ambulances. 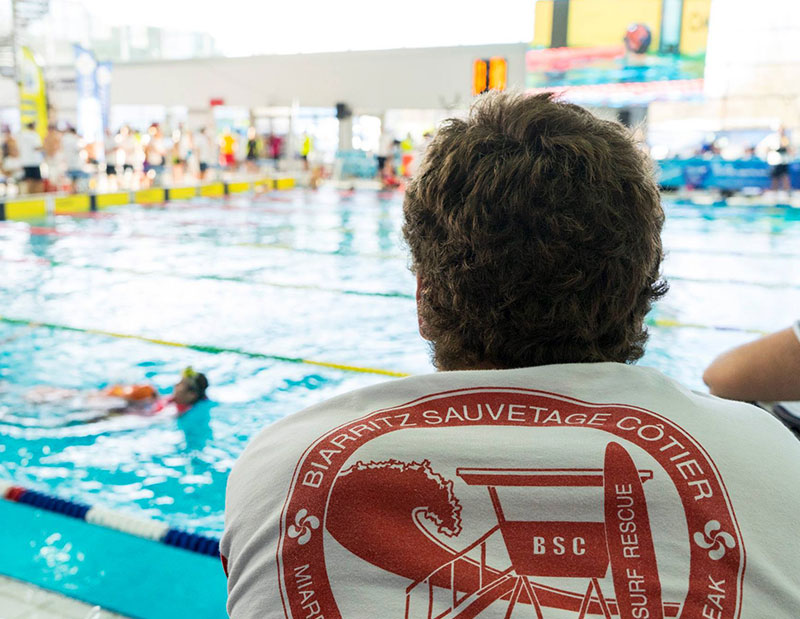 During 2018, the board management decided to remodel the club storage with separate spaces for training and operational emergency equipment. The club is also setting up a bodybuilding and cross training area to develop the general physical preparation of athletes.

In 2019, more than 1000 members aged from 7 to 77 years old get invested in different areas, that collaborate to the health and dynamism of the Surf club:

During summer 2019, the club acquires 20 surfskis, to develop training to get more competitors to participate to surf ski events.

The year 2020 was marked by the global health crisis but the club has been able to adapt and rebound to ensure the continuity of sports training, first aid training as well as its operational support to local structures.

Thanks to the participation of all members, but also thanks to the confidence granted by the municipality of Biarritz, the club is now giving itself the opportunity to achieve its ambitions.

Association governed by the law of July 1, 1901, the legal capacity of the BSC is declared in the sub-prefecture of Bayonne. The last status approved in 2013.

Given the size of the surf club and its volume of activity and success, the offices have hired several employees since July 1, 2004. There are currently 9 of them: 3 for administration and 6 sports educators.

For further details, please refer to the employees or office bearers.

Nota: all employees and educators have an email address such as: name.lastname@biarritzsauvetagecotier.com

All office bearers mentioned here above are volunteers. Thanks for your understanding. 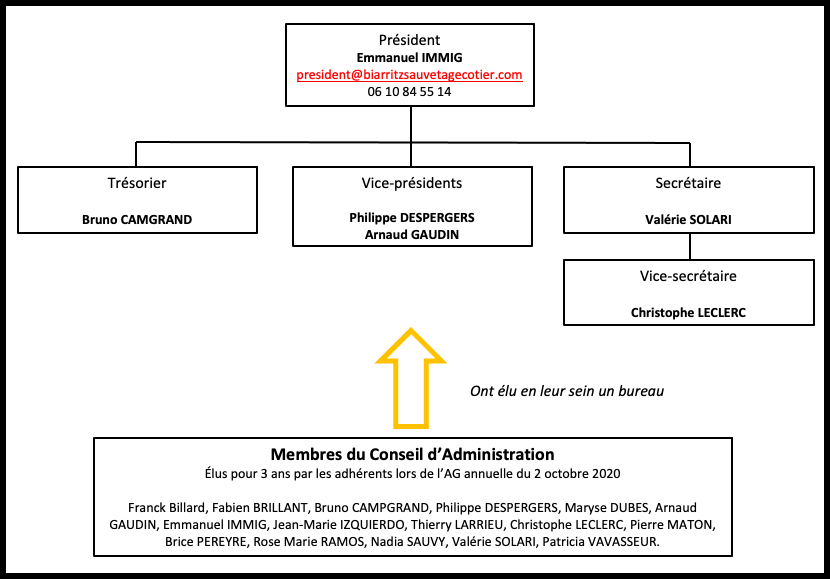 Here is the trombinoscope of the Board of Management

All members mentioned here below are employees (except the president).

At every competition, the Biarrots are present at any age category.
They perform in any event of surf lifesaving: pool rescue, surf & sand events, surfboats, long distance…

The Hall of Fame doesn’t stop from growing. Please find below some important results.